skip to main | skip to sidebar

I thought some photos of the rec facilities at the new embassy compound would be of interest. 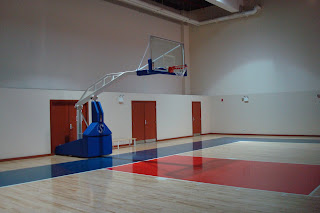 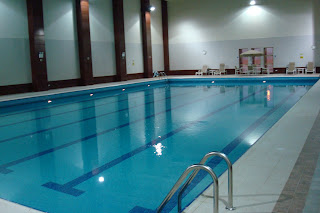 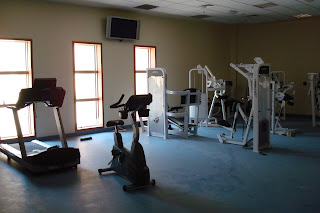 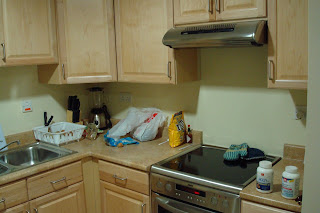 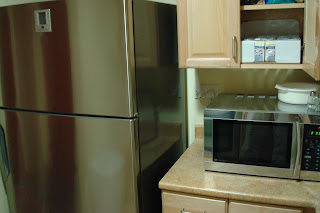 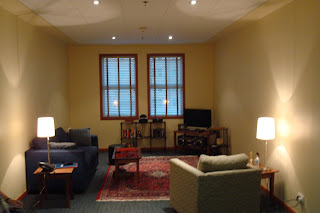 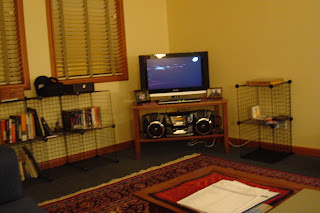 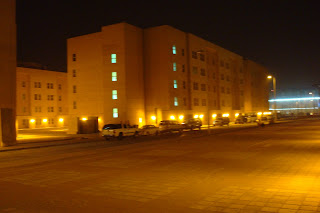 You may have hear that we were trying to move some people into the New Embassy Compound apts. well, some of us made it. and, herewith, some interior photos of the apt.
Posted by Ed in Brigantine at 9:59 PM No comments:

The donuts are not bad. I've had better, Krispy Kreme still remains the best for cream filled, of course. But, give DoJo's its due - the dough is not overly chewy, and the galze is quite good. They'll need to work on the recipe, or preparing the batter or letting it rise more before fyring, but all in all, a decent donut - and for Baghdad, that is saying something. Oh, and for those of you who have endured KBR donuts, you'll not be surprised to learn, these are better. And, a convenient location near the NEC. 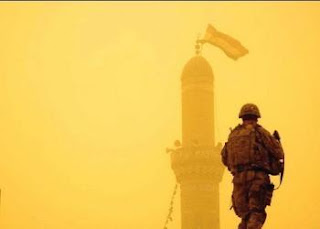 Go the link for a view of the situation of sandstorms. It will give you some grave understanding of why we do not like sandstorms here.

Posted by Ed in Brigantine at 3:54 PM No comments:

As you have likely learned by now, the International Zone (IZ), in which is located the American Embassy compound as well as other diplomatic missions and Iraqi government facilities, has suffered numerous rocket or mortar attacks since Easter Sunday, March 23. On Sunday there were some injuries of u.s. personnel; one of the injured later died in hospital (Requiescat in Pacem). On tuesday and today, there were more injuries. As bad if not worse, many of the rockets or mortars targeted at the IZ have gone off target or overflwon the IZ and impacted residences in other parts of Baghdad, killing more than a dozen innocent civilians. evidently, the terrorists care as little for the lives of fellow Iraqis as they do for foreigners' lives.

There is, of course, increased tnsion in the IZ to include the Embassy, but spirits and morale remain high in the face of the attacks. we are all working diligently to support each other and to get our jobs done even with the interruptions that come. whether this is a spike (temporary) or an uptick (indefinite) in violence is hard to know at this point. hope springs eternal.

Keep all of us here in your prayers, good thoughts, and karmanic wavelengths. seriously, pray for the safety of all those who serve the cause of freedom over here, iraqi, american, brit, or others.
Posted by Ed in Brigantine at 10:07 PM No comments:

Tennis at the New Embassy Compound

Since July 2007, tennic courts have been completed at the New Embassy Compound. There are also several outdoor baskball courts, a baseball diamon (need grass), a soccer pitch (same issue), and an indoor pool (i'm guessing that was in the plans as the competition pool for the American Embassy school. yes, a school was planned. (you know the country song: "what was I thinkin'?")
well, the courts are playable, but they are in bad shape already. the seams between the underlying sections of concrete, or maybe it is between the overlay of composite asphalt+ material, are prominent. this is apparently water damage. very typical project - provide somehting useful for morale and welfare, then let it sit unused. sort of like getting computers but not delivering them to users for several months.
so who gets to play on these courts. for operational security reasons, i cannot answer that. but, suffice it to say that all these facilities are sitting there unused. it now appears that only those who move into the New Embassy Compound residential facilities will be able to regularly access the facilities, lest some of us decide to stay in our trailers walking distance from work instead of shuttling from the NEC residences to work. the shuttling is a major dis-incentive for many, but if you deny easy accesss to the morale, welfare, and recreation facilities there unless you reside there, you increase the incentive for people to move there. that sounds very conspiratorial to me. silly, of course the embassy management wants to encourage all embassy personnel to use teh New facility, to build comraderie, and not create two classes of Embassy employees, the NECsters and the Trailer trash. silly of me to think for a nano-second otherwise.
well, given the reports on the building project, i may be back in the u.s. before this really becomes a segregationist issue. for more on the embassy project and its delays and problems, see the hearings help by Congresman Henry Waxman.
Posted by Ed in Brigantine at 9:04 PM 2 comments:

5 years in Operation Iraqi Freedom Given the impatience of the American people, it is truly amazing that we have lasted this long. I understand that Barack Obama said this war was longer than WWII. well, longer than American participation in WWII - we entered WWII 2 years and 3 months after it had begun. in total, it was just a few weeks shy of 6 years. Does the senator need a history lesson?

Speaking of senators, we had Levin of Michigan, Lieberman of Connecticut, Graham of South Carolina, and McCain of Arizona here. good visits. good messages. busy busy place - then the VP was here and visiting up north in the Kurdish autonomous region.

the twentieth of march this year, Gregorian or common calendar, is the first day of the Iranian/Kurdish/Turkic calendar, birthday of Muhammad in the Muslim calendar, Purim in the Hebrew calendar, and Maundy Thursday in the Christian calendar. Not all these dates fell on the exactly same 24 hour period, but close enough that here we are focused on all of them. Iraqis had a public holiday for the Prophet’s birthday, but Maundy Thursday and Purim got little coverage. The small Christian communities here are divided between Western and Eastern observance of Easter, so for westerners, it is Maundy or Holy Thursday but for Easterners it is another 5 weeks. Why all Christians don’t celebrate Easter at the same time as Passover I’ll not quite figure out - given that the Last Supper was a Passover Seder, this would seem to make sense.

Now I’m listening to BBC criticize the United States and the UK for creating the refugee “crisis” in Jordan and Syria. Ahh, right, I see, the refugees who fled Iraq because fellow Iraqis were killing them or threatening them with death had nothing to do with it. Or is it that maybe Al-Qaeda’s efforts to foment sectarian hatred were successful, that Sunni attacked Shia, the Shia returned the favor and off the rfeugees went to escape retribution. Or, maybe it was the Shia deciding to kill Sunnis who they saw as the supporters of Saddam. Hmmm, maybe many of the refugees in Jordan and Syria are Saddamists and Baathists who are not welcome in Iraq now. Many of the most-favored former regime members who escaped are now in Jordan and Syria because as Sunni they are welcome, and as Baathists, they are welcome in Syria.

So, how is it here after 5 years? Well, compared to what? Compared to a year ago? Compared to the day after Saddam’s fall? Or maybe we should compare it to the days of Saddam’s rule? The days when people were dropped into shredders for offending Qusay or Uday? Or the days of gassing of Kurds? Or the days of war against Iran? Or death sentences for minor slights against Saddam? The days of Qusay taking girls away from their families for a few days and returning them when he was finished with them? So, let’s compare the situation now to the days of Saddam, the days when the elite were the supporters of Saddam, and the rest of the population had little, except fear and abuse.

So, five years on, was it worth it? Was it worth over 4,000 dead coalition soldiers and many thousands wounded? All the Iraqis who died who might not have died? Well, I guess that depends on whether you thought it fine for the world for a dictator as brutal and vicious as Saddam to continue rather than risk pain and suffering to undo his regime, let him continue or stop his payments to suicide bombers in Palestine and Israel, despair of or hope for democratic governance in Arab states, oppose or support open societies, seek or not care about integrating Arab countries into the global community. Worth it? Yeap. Necessary? Yeap. Overdue? Yeap. Difficult? Yes, but the best things in life are as difficult as they are rare. True freedom is rare, and it is rare.
Posted by Ed in Brigantine at 5:49 AM 2 comments:

We've just had a visit from 4 senators and one vice-president. All of this occurs over a very short period of time - our poor management and logistics people were run ragged. By now the news is out in the press: senators Levin, McCain, Lieberman, and Graham were here followed by the v-p.

At the same time, the bad guys have decided it's a good time to launch more rockets, mortars, and suicide bomb attacks. It is difficult to tell if this is a last, desperate gasp or if it is they are stronger than most of us believed. But after five years, no one is going to say that the terrorists are finished, much as we wish they were.

Check out the recent abc/bbc/ard/nhk poll on security and other issues in Iraq. It's fascinating stuff. Not a rosy picture, but an indication that things are improving. Very useful a few weeks before the Ambassador and General Petraeus testify on progress before Congress in April.
Posted by Ed in Brigantine at 7:16 PM No comments: